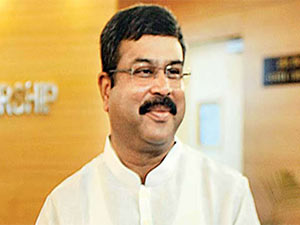 Dharmendra Debendra Pradhan (born 26 June 1969) is the Cabinet Minister for Petroleum & Natural Gas and Steel in the Government of India. On 31 May 2019, Shri Pradhan began his second consecutive tenure at the Ministry of Petroleum & Natural Gas becoming the first such incumbent in the history of independent India. Shri Pradhan was promoted as a Cabinet Minister on 3 September 2017. As a Member of Parliament, Shri Pradhan currently represents Madhya Pradesh in the Rajya Sabha and was earlier a member of the 14th Lok Sabha.
Facebook
Twitter
Linkedin
Instagram
Youtube